You are here: Home / About the Author 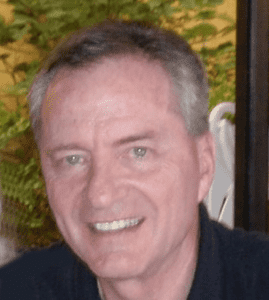 A life-long Kansan, Steve Miller was born in 1948 to Jack and Norma (Ryan) Miller in Independence, Kansas. In 1952 Steve’s family moved to Wichita where his father accepted a sportswriter/editor position at the Wichita Beacon newspaper. Later in the same year, Jack Miller became Sports Director at a new Kansas television station, KAKE- TV. Over the next 30 years, Steve’s dad became a legendary high school and college football official, sports editor, editorialist, and television sports commentator. In addition, Jack Miller was inducted into the Kansas Baseball Hall of Fame in 1987 as a player, coach, and sportswriter.

In Steve’s formative years, his father’s career in sports journalism provided him with many opportunities to experience top-level athletic events and to meet high-profile athletes and coaches. In his own athletic career, Steve participated and lettered in football, wrestling, golf, and track & field at Wichita Bishop Carroll High School, where he graduated in 1966. In 1971 Steve graduated from Wichita State University with a degree in secondary education. In the same year Steve began his coaching career as head football coach and social science teacher at Rossville High School in Rossville, Kansas. In addition to coaching football, Steve was an assistant coach in basketball and track & field for the Bulldogs at Rossville. Three years later, in 1974, Coach Miller moved back to Wichita, where he coached at Kapaun-Mt. Carmel High School, serving as an assistant football coach under legendary Kansas high school football coach, Eddie Kriwiel. During Steve’s years at Kapaun-Mt. Carmel, the football team won the class 4-A State Football Championship in both 1974 and 1975. In addition, as a track coach at KMC, Steve assisted with teams that placed third at the State Indoor Championships in 1975 and fifth at the Outdoor State Track & Field Championships in 1976. 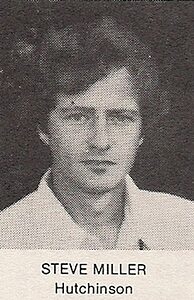 In 1974 Steve met Rosemary Falconbridge, who also was teaching at Kapaun-Mt. Carmel High School. They married in 1976 and moved to Hutchinson, Kansas where both were hired as teachers at Hutchinson High School (Steve in U.S. History and Rosemary in Spanish and English). Steve also served as an assistant coach in football, basketball, and track at that time. In 1979 Steve became the head football coach for the Salthawks and discontinued his duties as an assistant basketball and track coach in order to focus on the weight training program during the off-season. During Steve’s career at Hutchinson High School, the Salthawks finished as Ark Valley League Co-Champions in 1983, and Steve was selected as Ark Valley Coach of the Year two times. Coach Miller also served as an assistant football coach in the Kansas Shrine Bowl in 1980, and he was the Kansas Shrine Bowl head coach in 1981 and 1983. In the spring of 1984, Steve concluded his tenure as the head football coach at Hutchinson High School.

That same year Steve became the head football coach of Wichita East High School. The 1984 East team was Wichita City League Co-Champion in football, and Steve was named the Wichita City League Coach of the Year. During the summer of 1985, Steve served as the head coach of the Kansas Elks All- Star Football Classic, which was a Central Kansas All-Star game with Wichita City League high school all-stars matched against all-stars from schools in a surrounding area as far away east as El Dorado, north to McPherson, west to Hutchinson, and south to the Oklahoma border. Later, in 1987, Steve served as an assistant football coach in the Kansas Elks All-Star Football Classic.

Steve and his family moved back to Hutchinson in 1988, and for the first time in his career, he was not coaching. Instead, Steve became the Assistant Principal and Activities Director at Buhler High School. Steve’s wife Rosemary returned to serve as an English teacher at Buhler High School for the second time in her career. Eventually their two sons played high school football, both earning league honors. In fact, younger son Kevin was an All-State linebacker who played in the Shrine Bowl that Steve had previously coached three times.

After leaving Buhler High School in the year 2000, Steve worked at the central office level as Director of Human Resources for USD 308 in Hutchinson, Kansas. This move was the second time Steve had worked for USD 308 in his career.

Finally, Steve left public education altogether in 2002 when he became the Director of Human Resources at TECH, Inc. in Hutchinson. Steve retired from TECH, Inc. in the fall of 2009 but continued his human resources career when he accepted a job at Wesley Towers as the Vice President of Administrative Services.

Not content to leave coaching behind forever, in 2006 Steve accepted a Rule 10 assistant football coaching position at Buhler High School under first-year head coach Steve Warner. What made this particular assistant coaching position unique was that Coach Warner had been a high school player when Steve was a coach at Hutchinson High School. In a strange twist of fate, Steve Miller coached as an assistant under his former Hutch High player, Steve Warner, for the 2006 through 2009 seasons.

After retiring from Wesley Towers in 2011, Steve has been able to pursue his interest in the history of Hutchinson High School on an almost full-time basis, with this book the result of those efforts. Since coaching is truly in his blood, he also is serving as a Rule 10 coach for 8th grade boys basketball and assists with his grandchildren’s athletic teams and other activities.

Today you might see Steve Miller out on the streets of Hutchinson in a red truck with the front license plate, “Football = Life.”  Of course, that oversimplifies life in a humorous way, but the fact remains that football, and particularly Hutch High football, has been one of the great loves of his life.